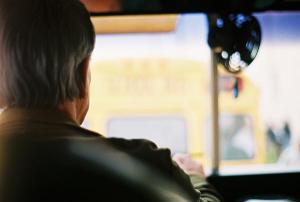 One fine day, a bus driver went to the bus station, started his bus, and drove off along the route. No problems for the first few stops – a few people got on, a few got off and things went generally well.

At the next stop, however, a big hulk of a guy got on, six foot eight, built like a wrestler, arms hanging down to the ground. He glared at the driver and said, “Big John doesn’t pay!” and sat down at the back.

Did I mention that the driver was five foot three, thin, and basically meek? Well, he was. Naturally, he didn’t argue with Big John, but he wasn’t happy about it. The next day the same thing happened – Big John got on again, made a show of refusing to pay, and sat down. And the next day, and the next.

This grated on the bus driver, who started losing sleep over the way Big John was taking advantage of him. Finally he could stand it no longer and so he signed up for body building courses, karate, judo, and all that good stuff.

By the end of the summer, he had become quite strong; what’s more, he felt really good about himself.

So on the next Monday, when Big John once again got on the bus and said, “Big John doesn’t pay!” The driver stood up, glared back at the passenger and screamed, “And why not???!!!”

With a surprised look on his face, Big John replied, “ Because Big John has a bus pass.”

The moral of this incident/story is quite self evident. However, it is a lesson that many of us seem to overlook and disregard in the many activities and chores of our life.

We learn from this incident that a person should not be hasty in making assumptions and judging a situation or an individual from what seems to be the apparent.

It is essential that a Muslim assumes the best of his fellow being and gives him the benefit of the doubt. If possible, one should allow the fellow being to explain himself as to clear any doubts one may have.

Our Nabi صلى الله عليه و صلم has stated that being hasty is from Shaytaan whilst steady composure is from Allah سبحانه و تعالى.

In the same manner ‘Ulamaa have stated that if there is a single reason for doubt in a matter relating to a person then that doubt should have an effect on the decision that is made.

In conclusion, one should take all factors into consideration and avoid hastiness in judging an individual. Instead, one should try to make the matter clear as to avoid placing false accusations on anyone.