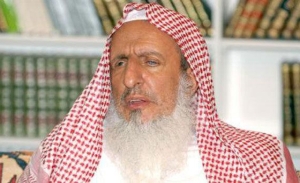 Saudi Arabia’s Grand Mufti, the highest religious authority in the birthplace of Islam, on Saturday denounced attacks on diplomats and embassies as un-Islamic after deadly protests against a U.S.-made film mocking Islam’s founder.

Sheikh Abdulaziz bin Abdullah Al al-Sheikh also called on governments and international bodies to criminalize insults against prophets and excoriated the film that has prompted a wave of fury across the Middle East.

“It is forbidden to punish the innocent for the wicked crimes of the guilty, or to attack those who have been granted protection of their lives and property, or to expose public buildings to fire or destruction,” he said in a speech carried by state news agency SPA.

Describing the release of the crudely made short film as “miserable” and “criminal”, he added that attacks on the innocent and diplomats “are also a distortion of the Islamic religion and are not accepted by God.”

At least nine people were killed after noon prayers on Friday in demonstrations across the Middle East.

Washington sent extra troops to guard its embassies after the U.S. ambassador and three other Americans were killed in an attack on a U.S. mission in Libya on Tuesday. The violence spread to Egypt, Lebanon, Tunisia, Sudan, Yemen and elsewhere.

There have been no reports of anti-American demonstrations in Saudi Arabia, a key Arab ally of the United States and country that holds significant influence over the world’s 1.6 billion Muslims via its guardianship of Mecca and Medina.

Al al-Sheikh’s statement echoed the official position taken by Saudi Arabia on Thursday, condemning both the film and attacks on U.S. embassies.

Earlier on Saturday, al-Qaeda’s regional wing based in Yemen called on Muslims to kill American diplomats in Islamic countries and step up protests against the film.